Your Legislator Needs to Hear from
​you on theMinimum Wage and Tip Wage
​Activists are circumventing the legislative process and using the ballot to advance their own union driven agenda. Raise up Massachusetts, which is funded mostly by out-of-state labor PACs, has collected signatures to move to the next stage of the 2018 ballot process.
The proposed ballot question would increase minimum wage by 36% and an even more costly 140% increase for tipped employees in only 4 years! 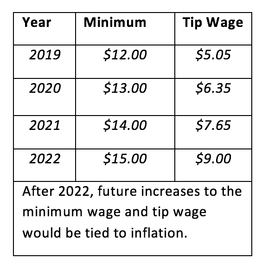 Wage laws should be determined by the legislature and not at the whims of the voting public who may spend a minute reading the title of a ballot question and certainly not by the big unions who spend unlimited money to get what they want.
​Impact of Minimum Wage
Impact of Altering the Tip Credit
To contact your legislator, click here.
RESTAURANT DIRECTORY
BUSINESS DIRECTORY
HELP CENTER